As described in an article in Next Avenue, nursing homes have evolved over the years from alms houses for the poor to today's skilled nursing facilities. At the same time, they've also evolved from homelike settings to be more like hospitals. At the same time, in recent decades, we've seen the huge growth of the assisted living industry which attempts to be more homelike, often aspirational, with luxurious common areas.

The article relies heavily on Dr. Muriel Gillick's book, Old and Sick in America: The Journey Through the Health Care System, which describes how real estate developers started building assisted living facilities seeing them as akin to hotels, and then were surprised to learn about their residents' need for care.

The Growth of the Assisted Living Industry

I've seen the evolution of senior care over my 30 years practicing elder law. Back when I began, assisted living facilities did not exist. Neither did today's robust home care industry. Nursing homes provided less skilled care than today, and many were smaller "mom and pop" operations. Today, seniors only go to nursing homes when they have no other options, whether due to their high level of need for care or because they can't afford the alternatives of assisted living or home care. The result is that residents of nursing homes are often older and sicker than was the case 30 years ago.

The Next Avenue article and Dr. Gillick's book describe how financing has influenced trends in long-term care. The number of nursing homes grew by 140% in the 1970s after Medicaid (MassHealth in Massachusetts) began covering nursing homes in the 1960s. Today, Medicare reimbursement rates are much higher than those from Medicaid, so nursing homes are qualifying as skilled nursing facilities in order to obtain Medicare payment.

Quality of Care and Covid Deaths

While the quality of care in nursing homes varies considerably, some have been the subject of periodic scandals, exposés, investigations, and attempts to regulate them to provide better care, with mixed results. The current Covid-19 pandemic has brought them new attention as their residents have been especially vulnerable. As of May, 42% of all coronavirus deaths were residents of nursing homes or assisted living facilities. A whopping 62% of those in Massachusetts who died early in the pandemic resided in nursing homes or assisted living facilities. 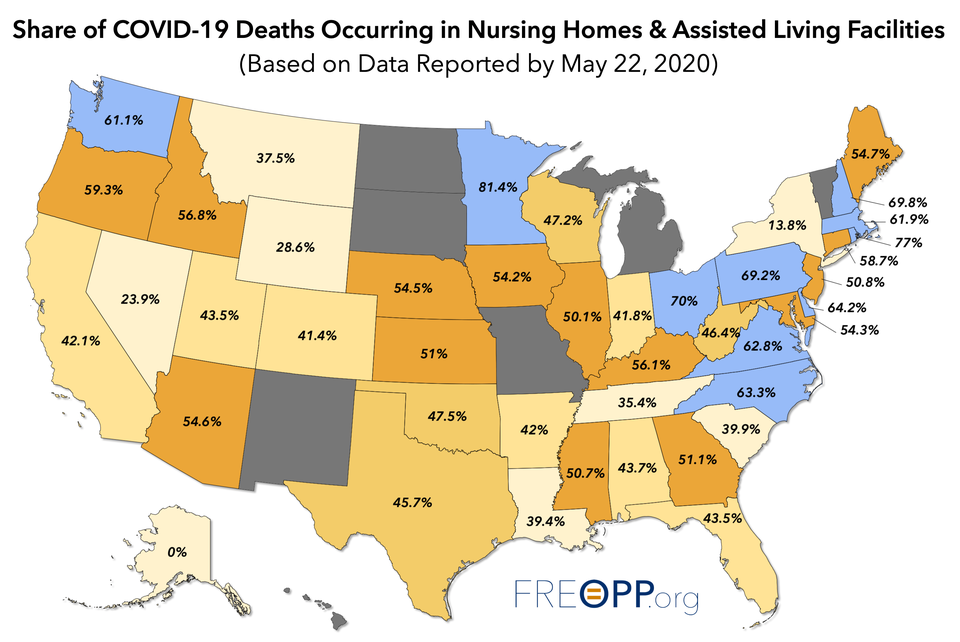 A more recent analysis by The New York Times pegs the proportion of such deaths at 34% nationwide. In Massachusetts, it's 53%. (One side effect of this plague on seniors is that New York state's covering up of its numbers early in the pandemic may bring down Governor Andrew Cuomo. Long known for his bullying tactics, women have finally felt able to come forward to report his boorish behavior towards them since disclosure of the Cuomo administration's fraud has weakened the governor's political standing.)

Given the age and frailty of many assisted living residents and of most nursing home residents, their close living quarters, and their need to interact with caregivers, their vulnerability to the pandemic is no surprise. But it has drawn new attention to the shortcomings of our system (or lack of a true system) for caring for frail seniors.

Failure of the 5-Star Ratings System

We have responded to past crises in nursing home care by adopting new regulations and oversight. These have had some beneficial effects, but certainly not enough. One more recent innovation has been the five-star rating system for nursing homes, which is available on Medicare's Care Compare site. This has meant to make it easier for families placing loved ones in facilities to have a better sense of their quality. Unfortunately, a new exposé in The New York Times demonstrates how fraught this system is.

As with any rating system, the five-star rating is gamed. It relies heavily on self-reporting by the facilities, which is often inaccurate whether due to negligence or intentionally so. And as MCAS causes schools to "teach to the test" neglecting their other important functions make sure their students obtain high math and English scores, nursing homes focus only on those measures taken into account in the ratings system.

There's a huge incentive for nursing homes to take whatever steps they can to obtain high ratings. The New York Times article reports that nursing homes with five-star ratings earned on average $2,000 a bed, those with three or four stars $1,000 a bed, and those with one or two stars, lost money.

Despite repeated efforts to assure quality of care in nursing homes, we haven't succeeded. The Pioneer Network, Green House homes, and The Eden Alternative offer alternative approaches, but they constitute a small share of facilities nationwide. As I've suggested before, we could make sure we pay our care providers more. We could do a better job with regulations and oversight. Or, perhaps we could eliminate the profit motive, requiring that all Medicaid or Medicare-covered facilities be non-profit or public. After all, as taxpayers, we're footing most of the bill for most facilities.

We can hope that the pandemic deaths turn into a catalyst for a fresh look at how we care for seniors. For some of us baby boomers, our future depends upon it.

The Coronavirus and Senior Living Facilities

Deaths in Nursing Homes: How We Let Down Our Older Citizens